Homeopathy :  Don't be put off by the name! It's pronounced as it is spelt and practiced by "homeopaths". Homeopathy or homeopathic medicine has been around for thousands of years. The ancient Egyptians knew the principle “Like Cures Like” upon which this system of medicine is based.

Origins of Homeopathy:   Samuel Hahnemann, who lived about 200 years ago, is known as the father of modern homeopathy. It was he who discovered that repeated dilution and shaking of a substance actually resulted in it having a more powerful medicinal effect.  Some scientists may argue that this is not possible, but millions of people can testify to the effectiveness of homeopathic remedies... and as they appear to work on tiny babies and animals, it is not just a case of mind over matter! Read more below about how homeopathy proved itself to me.

Like cures like - the central principle of Homeopathy:  Anything that can cause symptoms in a healthy person can be used in a minute dose to heal a person who is suffering from a similar set of symptoms. For example, we know that coffee, when we drink it to excess, can cause hyperactivity, shakiness, over-excitability and sleeplessness. Made into a homeopathic remedy it can be used for hyperactivity, or insomnia, perhaps in a child who is excited waiting for Christmas!

Suitable for all ages... Homeopathic medicine can be used for everyone, at any age. It is extremely safe, even for tiny premature babies, and for the frail, elderly or sick.

Homeopathy is particularly suitable for children. They often respond rapidly to treatment which does not have side effects or build up resistance like antibiotics, but can bring a gradual improvement in overall health and vitality. It can be wonderfully helpful with sleep and behaviour problems, a fact that is sadly, little known.

... and for all conditions - because homeopaths treat people, not diseases. They have only been tested, or 'proved' on humans. Thousands are available. They are chosen to match each individual's symptoms and characteristics, so even if doctors have told you they cannot find anything wrong, or that there is nothing they can do to help you, with homeopathy there is always something to offer. 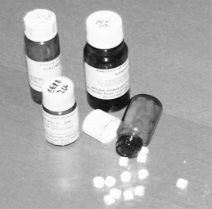 At the first appointment I will ask you to tell me as much as possible about your problem, what makes it better and worse and how it started. I will also want to know about your health history, some general charactersistics such as your appetite, sleep, energy and moods for example, and the sort of illnesses that affect your family.
​
​I will then use the information you have given me to help select the appropriate remedy for you, and this will usually be given in the form of small white pills that dissolve in the mouth. These may be taken daily, but don't be surprised if you are only given one dose. Homeopathic remedies are administered to stimulate the bodies own healing power, not to overcome symptoms, like chemical drugs. One pill in a high potency can have a significant long-term effect.

I will want you to report on any changes you feel and return after 2-4 weeks to assess your response, when I will re-prescribe if necessary. Becoming healthy is a process at which you and your homeopath work together.

How Homeopathy proved itself to me...

Tom responded to treatment, so I then turned to homeopathy for my murderous PMT; it worked immediately. When I developed panic attacks in pregnancy, it worked again. I started dabbling with remedies from the local health food shop for colds, earaches, injuries, teething babies etc and realised after some months that we were not needing to go to the doctor any more. (And have only rarely ever since.) ​

Eventually I had constitutional (holistic) treatment for my life-long eczema and as that cleared my general health, energy and enjoyment of life improved too. I decided to train to be a homeopath.

Homeopathic medicine has never ceased to amaze me such as when my goldfish was found floating on the water seemingly gasping her last, only to be back to normal within minutes of a homeopathic remedy being dropped in the tank! Science may not yet be able to explain how homeopathy works, but I have seen too many successful outcomes to believe it is just a placebo.

In response to the anti-homeopathy reports in the media, and to those who say homeopathic medicine "cannot work" I suggest they join a course and learn about the history and philosophy of homeopathy, and how to use it, and at least try it for themselves before they decide. Considering only about 15% of all conventional medical interventions are proven to be beneficial (ref:BMJ Clinical Evidence Handbook Summer 2007) and most conventional drugs have side-effects, which homeopathic remedies do not, isn't it worth a try?​​